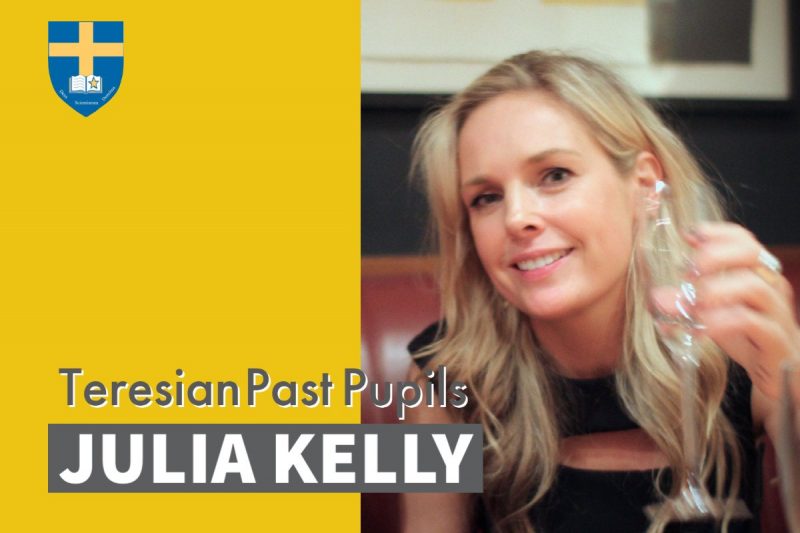 This week’s Spotlight is on Past Pupil Julia Kelly, Class of 1987. We asked her a few questions about her time since finishing with us, and not surprisingly (she’s a writer!), she tells it so much better than we could paraphrase, so here it is, unedited.

What did you go on to study after finishing school, and if not study, what did you do?

I studied English and Sociology at a university which shall remain unnamed but which my late father described as the worst in Europe, received a post-graduate diploma in journalism, then spent seven years getting fired from various publishing houses in London where I had a lot of fun but was a sub-standard desk editor, to put it mildly.

I began writing for Rough Guides after being fired from my editing job there, then got my first column for an Irish magazine and used it to cajole my way into the Tyrone Guthrie Centre at Annaghmakerrig, where I met the artist Charlie Whisker who became my partner and my mentor. The two weeks I spent there transformed my life: I wrote my first book shortly after and Charlie and I went on to have our daughter, Ruby Mae, who is now a gorgeous twelve year old who’s as kooky, clever and unique as her late father – Charlie very sadly died from Alzheimer’s Disease in April of this year.

What do you do today?

I work as a full time writer. My first novel, which was published in 2008, won an award which lead to a large two book deal with a London publishing house and meant I could give up my sleepy old ‘job’ (I did exactly nothing) in the Civil Service and write full time.

I am currently finishing my fourth book, it’s a work of non-fiction and is about my mother’s death. She died swimming in the Galapagos in 2012. A year after her death we received a post mortem in Spanish which we subsequently got translated. It was a cold, scientific description of a human I knew so intimately, every flaw so reassuring in its familiarity, that it made me want to describe her in detail myself. In this book I go through my mother’s body parts and put her back together, limb by limb, so that by the end of the book she is a fully animated person again.

Any fun facts about you we should know?

I have a six year old labradoodle called Sunny who is as highly strung as her owner and as grumpy in the mornings. I would rather chew bees that go on a long haul flight to anywhere (unless I could sit on the captain’s knee for the duration to keep an eye on things/take over if needed – it’s all about control for me). I have the ugliest knees in Ireland unfortunately, I can’t tolerate the smell of bamboo or goat’s cheese and when I’m not writing or arguing with my twelve year old, you’ll find me thumping around the local park – I’m running more than Forrest Gump these days.

What is your fondest memory of the Teresian School?

This may not be an entirely fond memory for any of our poor, beleaguered teachers but myself and my cousin Judy (now an exceptionally gifted documentary maker) had been selected to sing at the altar of a sombre and formal school mass in Donnybrook Parish. Our music teacher, high up in the gallery on her organ, began the opening chords of a well-rehearsed hymn an octave too high, giving our voices nowhere to go by the chorus, which resulted in the most ferocious attack of rib-aching giggles from the two of us, that could not be subdued for the remainder of the service. The deeper the trouble we were in (and the violent prodding from our livid teachers in the row behind us as we retook our seats after each destroyed hymn told us it was pretty damn deep) the more impossible they were to quell.

It is also important to note that the reason I decided at the age of 14 that I wanted to be a writer was because my wonderful English teacher, the late Mrs McGarry, was endlessly encouraging of my efforts and believed in me so much more than I did in myself. I was a poor and badly behaved student in almost every other subject – I spent most of French class on the corridor, for example – but Mrs McGarry’s attention and praise made me feel for the first time that I had some ability in something after all.  ⭐️