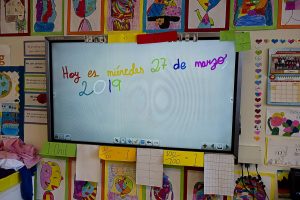 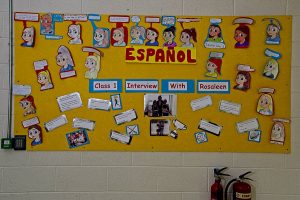 At the Teresian School, Spanish is taught as a curricular subject during school times for Students from Class 2 to Class 6, and as an afterschool activity for students from Junior Infants (Kinder A) to Class 6.

Spanish is taught through a communicative approach, prioritizing the speaking and listening skills. The classes are delivered in a relaxed environment and applying positive reinforcement. Interactive resources such as videos, songs and quizzes are used to motivate the children in order to improve fluency and to develop the oral aspect of the language. Other activities such as role plays, drama, singing and dancing, art and craft and games make the classes fun and productive.

Cristina is also the founder and director of Olé School of Languages and organiser of the language afterschool activities at the school. At present, students from Kinder A to Class 6 can choose to attend Spanish and French extra-curricular classes, and in the near future the school hopes to run more language classes.

In a multicultural world like ours, learning a language is so important, and learning it at an early age has many benefits. We look forward to your children joining us on their journey of discovering a new language, culture and country.